agosto 03, 2018
This article is specific to the Amiga 600, so the chip designations, addressing and all the rest are related to this system, even when not explicitly indicated.

Gayle is the custom chip that, among many other things, controls the ATA (IDE) port. There are two versions identified by the following chip numbers:

As far as I could understand, the only difference between the two is the lack (incomplete? Erroneous?) of support for the ATA port in the first version: in detail, version 391155-01 needs an external logic to generate the IDE_CS1 and IDE_CS2 signals, which are needed to control an IDE hard disk.


In the Amiga this logic is implemented by the XU1 chip, a PAL16L8B, which is a programmable logic that can not be rewritten.

This is the part of the scheme that shows how Gayle is connected to the PAL: 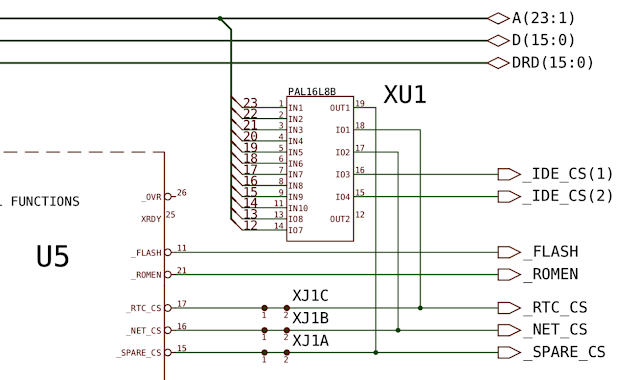 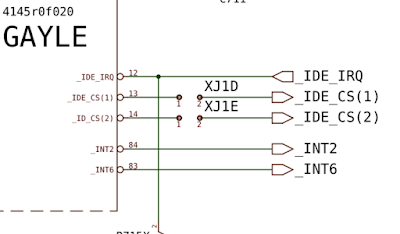 XU1 (the PAL) is mounted on motherboards where there is the first version of Gayle, where XJ1E, XJ1D, XJ1C, XJ1B and XJ1A jumpers are left open (that is Gayle doesn't handle these signals). In the Amiga I used for the tests the traces have been brutally cut (in fact it was already like that and the goal was just to add an HDD, but there was not the PAL168B chip inside...): 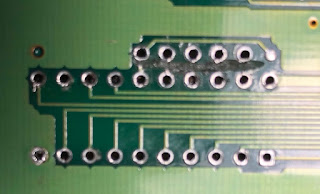 PAL just works as address decoder because the only inputs are the address lines from A12 to A23.

Below I will describe a possible implementation using GAL16V8 and written in VHDL. Unfortunately I could only test that the IDE hard disk actually works (signals IDE_CS1 and IDE_CS2), because I haven't an RTC or Arcnet.

On amigawiki.org there is a draft of Gayle specifications where there is a table that associates the address range to the signals CS1 and CS2:

So the address range dedicated to the IDE is in the 32K block ranging between 0xDA0000 and 0xDA7FFF. However, Amiga memory map tells us that the maximum limit can be extended up to 0xDAFFFF, so in VHDL, the decoding could be implemented like this:

Below there is the complete VHDL code to program the GAL16V8. To compile it and generate the Jedec file you need "Lattice ispLEVER Classic", which can be freely downloaded from here:

Finally, the Jedec compiled file (ie "addr_decoder.jed") can be programmed using a generic programmer like the cheap TL866.


VHDL source and compiled Jedec file can be downloaded from my github profile: 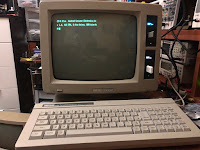 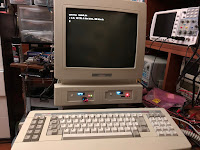